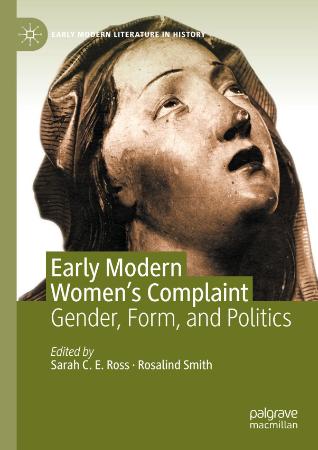 This collection examines early modern women’s contribution to the culturally central mode of complaint. Complaint has largely been understood as male-authored, yet, as this collection sho, early modern women used complaint across a surprising variety of forms from the early-Tudor period to the late-seventeenth century. They were some of the mode’s first writers, most influential patrons, and most innovative contributors. Together, these new essays illuminate early modern women’s participation in one of the most powerful rhetorical modes in the English Renaissance, one which gave voice to political, religious and erotic protest and loss across a diverse range of texts.
This volume interrogates new texts (closet drama, song, manuscript-based religious and political lyrics), new authors (Dorothy Shirley, Scots satirical writers, Hester Pulter, Mary Rowlandson), and new versions of complaint (biblical, satirical, legal, and vernacular). Its essays pay specific attention to politics, form, and transmission from complaint’s first circulation up to recent digital representations of its texts. Bringing together an international group of experts in early modern women’s writing and in complaint literature more broadly, this collection explores women’s role in the formation of the mode and in doing so reconfigures our understanding of complaint in Renaissance culture and thought.