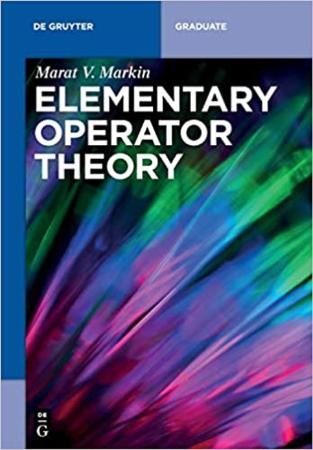 The book is intended as a text for a one-semester graduate course in operator theory to be taught "from scratch”, not as a sequel to a functional analysis course, with the basics of the spectral theory of linear operators taking the center stage.
The book consists of six chapters and appendix, with the material flowing from the fundamentals of abstract spaces (metric, vector, normed vector, and inner product), the Banach Fixed-Point Theorem and its applications, such as Picard’s Existence and Uniqueness Theorem, through the basics of linear operators, two of the three fundamental principles (the Uniform Boundedness Principle and the Open Mapping Theorem and its equivalents: the Inverse Mapping and Closed Graph Theorems), to the elements of the spectral theory, including Gelfand’s Spectral Radius Theorem and the Spectral Theorem for Compact Self-Adjoint Operators, and its applications, such as the celebrated Lyapunov Stability Theorem.
Conceived as a text to be used in a classroom, the book constantly calls for the student’s actively mastering the knowledge of the subject matter. There are problems at the end of each chapter, starting with Chapter 2 and totaling at 150. Many important statements are given as problems and frequently referred to in the main body. There are also 432 Exercises throughout the text, including Chapter 1 and the Appendix, which require of the student to prove or verify a statement or an example, fill in certain details in a proof, or provide an intermediate step or a counterexample. They are also an inherent part of the material. More difficult problems are marked with an asterisk, many problems and exercises are supplied with "existential” hints.
The book is generous on Examples and contains numerous Remarks accompanying definitions, examples, and statements to discuss certain subtleties, raise questions on whether the converse assertions are true, whenever appropriate, or whether the conditions are essential.
With carefully chosen material, proper attention given to applications, and plenty of examples, problems, and exercises, this well-designed text is ideal for a one-semester Master’s level graduate course in operator theory with emphasis on spectral theory for students majoring in mathematics, physics, computer science, and engineering.
Contents
Preface Preliminaries
Metric Spaces
Vector Spaces, Normed Vector Spaces, and Banach Spaces
Linear Operators
Elements of Spectral Theory in a Banach Space Setting
Elements of Spectral Theory in a Hilbert Space Setting
Appendix: The Axiom of Choice and Equivalents
Bibliography
Index

Thanks for downloading Elementary Operator Theory :