Thanatos The Court of the Unde – Alessa Thorn 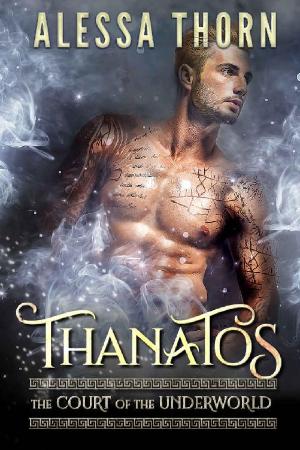 The titan of Death, a goddess of magic and mystery…an impossible crush that might finally have a chance.

THANATOS is the fifth book in a new paranormal romance series, based in a dark, sexy city ruled by Hades and his court of gods and monsters.

If you love fearsome, magical women on revenge quests, and terrifying monsters with a soft side, then you will enjoy the newest instalment of ‘The Court of the Underworld.’

When Thanatos starts having nightmares about Hecate, he kno it’s time to find out what fate has befallen his dearest friend and oldest crush. Selene is having the same dreams, and with her magic starting to bloom she’s going to need her great-aunt to teach her how to use it…no matter how much it pisses off Hermes.

Trapped under a sleeping curse for decades thanks to Pandora and her human pet Lander, Hecate doesn’t know what to make of the world she’s woken up to. Thanatos is free of his curse and is causing her hot flushes whenever he gets too close, and horror of horrors, her descendant is dating the most annoying Olympian of them all.

All Hecate kno for sure is that she needs retrieve her stolen keys to the cross roads if her power is going to be complete again, and then she can figure what to do with all of the repressed feelings she has for the Titan of Death.

The Court may have dealt with Pandora, but they are to discover her treachery created worse things than Pithos, and the war to bring them down is far from over.

THANATOS is a new story based on characters from Greek Myth. It contains adult content, including violence, swearing, and steamy sex scenes.

Thanks for downloading Thanatos The Court of the Unde – Alessa Thorn :